Auto dealer digital marketing its own game with its own set of rules. Many eCommerce businesses selling commodities at a low cost can often manage their paid digital marketing initiatives and eventually find a magical convergence of spend and creative to get the ROI they’re after. But for dealerships, who have an endless source of competition selling similar or identical vehicles at a high cost, it’s not so easy—but that hasn’t stopped innovators in the industry from developing new tools and tactics to help auto dealers manage costs and target the right customers online.

Let’s take a look at some of the biggest innovations in auto dealer digital marketing with a special focus on paid search and paid social marketing. What big developments have moved the industry forward in the past—and what developments stand to change the game again in the near future?

Over the past decade, paid search has taken over as one of the most important tactic for auto dealerships. According to a 2008 NADA report, dealerships were only spending 16.6% of their total advertising budget on digital mediums in 2007, compared to 26.7% going towards newspaper ads. 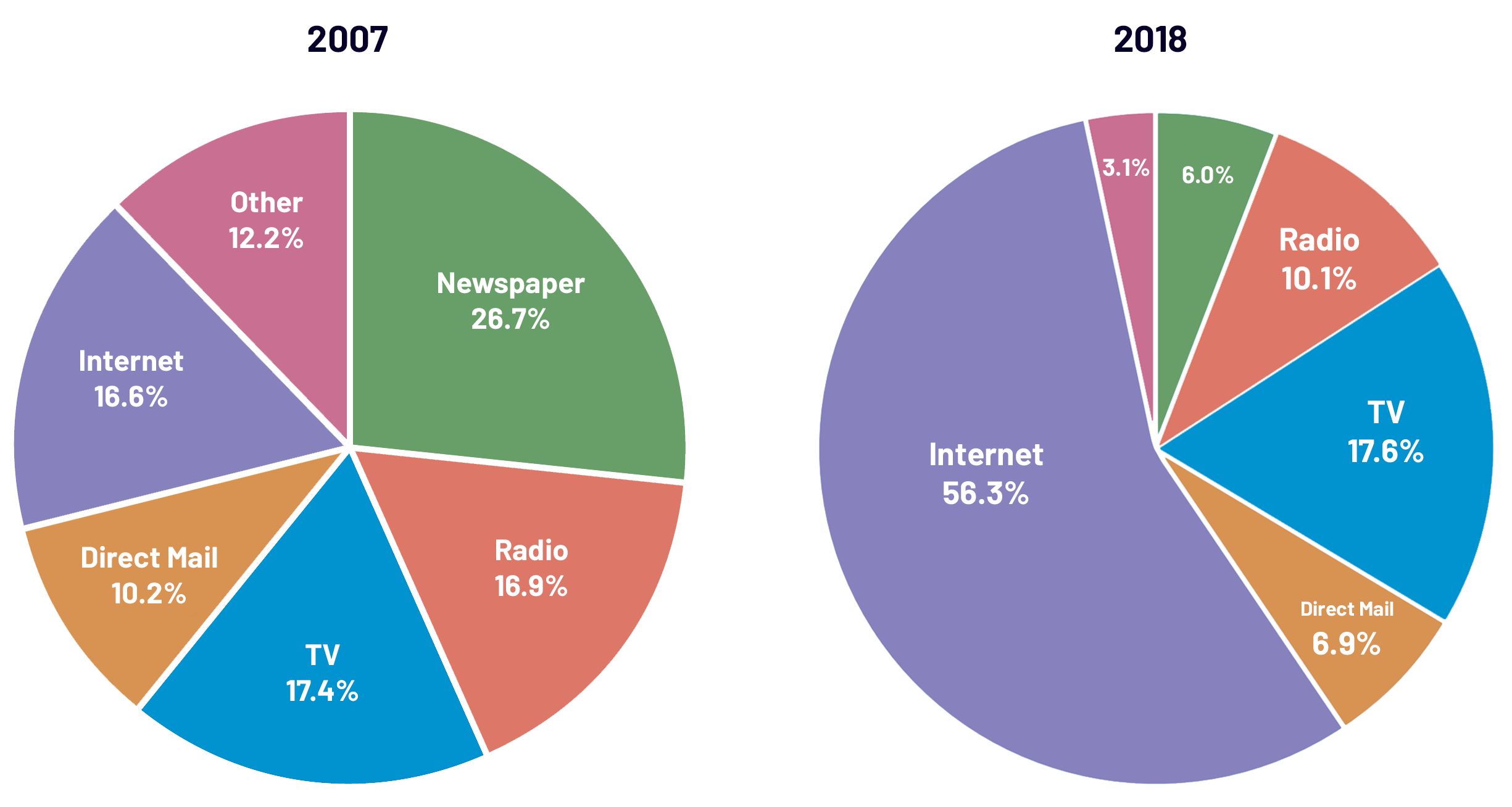 Today, digital accounts for a whopping ~60% of the average dealer’s spend. What changed?

For the answer, we look a decade back to an industry shift perhaps best capitalized upon by Dealer.com. In 2008, the company released Total Control Dominator, which would lead to a major paradigm shift. This one platform did things never before seen in the industry, including:

This product took Dealer.com’s already best-in-class websites and packaged them with very effective tools to manage and increase mid- and low-funnel traffic. Overnight, TCD set the gold standard and ultimately inspired dozens of imitations from companies who would make small, iterative changes to the core capabilities offered by the original product. This included everything from bidding based on how many days a vehicle has been in stock, to dynamic phone numbers, to use on sites outside the Dealer.com platform, and even to dynamic retargeting.

Newer to the digital scene but important nonetheless, paid social has come to play an increasingly important role in dealership marketing—and is second only to Google. And though it might seem counter-intuitive, there haven’t been many major evolutions in paid social since its debut—mainly because innovation in this arena has been largely driven by the social platforms themselves.

Facebook had dabbled in some behind-the-scenes advertising deals in its early days, but it was in 2007 (noticing a trend here?) that they first launched Facebook Ads and allowed any business to begin advertising on the platform. In 2012 Facebook took another leap forward with the Social Graph, giving advertisers more insight into user behavior and more control over their ad targeting. In the years since, Facebook has added more new features to their product catalogue including the ability for automotive software companies to easily run dynamic inventory retargeting ads.

Much like in the paid search arena, this has inspired similar capabilities in other social platforms like LinkedIn and Twitter. But for consumer-facing brands like auto dealerships, Facebook has effectively served as the beginning and end of paid social for 12 years. The ad platform is free to access and easy to use to a point; even as targeting and product-driven advertising features have expanded, the very manual experience of managing a Facebook ad account looks in many ways very similar to how it did all the way back in 2007.

In late 2017, Driven Data became the first company in the automotive space to connect first-party CRM and DMS data dynamically with paid social. This development pushed the auto industry into a new era where, for the first time, dealers were able to market to existing customers outside of direct mail or email. Early results showed a 150-fold reduction in cost to reach these known customers, with CPMs dropping to an average of $8-$10, compared to direct mail’s costs of $1,500 to $2,000.

During this period, Driven Data’s insights were leveraged by third-party agencies exclusively. Both internal and independent analysis of our platform’s capabilities using Facebook’s offline conversions and Driven Data’s sales match back tool showed consistent cost per vehicle sale to be between $40 and $100—compared to the national average of $620.

With this early success in paid social, Driven Data expanded on this capability using the same first-party audiences inside Google’s advertising platform in late 2018. Early testing revealed that 10-15% of a dealership’s ad spend was being wasted on known customers just after they’d made a purchase or visited for service, inspiring our focus on helping dealers to better control their ad spend on known customers who were the most likely to purchase or need service soon. By adding customers who have just recently purchased to a custom audience called “Recent Transactions” for rolling 30-day periods, we can actively suppress advertising from new sales campaigns.

Additionally, the expansion into Google empowered Driven Data customers to better target prior customers for service campaigns, and to protect against prior sales customers defecting to competing dealerships.

The Future of Dealership Paid Search and Social: Driven Data

Today, Driven Data is posed to completely transform the way dealerships utilize their own data to build intelligent paid search and social campaigns using predictive modeling. Learn more about our auto dealer digital marketing—and how you can improve your ability to target past customers at the right moment while dramatically lowering your overall ad spend.