A lead comes in!  Eyes light up, and the wheels of dealership processes begin to turn.  The goal is to take that lead and convert that person into a customer as fast as possible.  So, how fast is fast? How fast are you?

*Internet leads only. This data does not account for hours of operation

For this dataset, we're counting every response sent in less than an hour as fast.  That of course includes autoresponders, of which there are varying degrees of sophistication.  If you're going to use one, it's worth having a good one. It's primary purpose shouldn't be to simply stop the clock, but to provide an intelligent response that will inspire the customer to take whatever next step you've determined to be ideal.

The effects of Covid-19 on the industry are evident, and are clearly visible here as they relate to response times and closing rates. With normal operations, we might have a clearer picture of, say, how lead counts affect response times and closing rates.  But with shoppers in such a unique position and an inventory shortage that saw used car prices rise nearly 7% in September, the highest jump since 1969, these statistics offer a less than clear picture as to the relationships these metrics hold over one another. In contrast, they showcase the heroic effort dealerships have undertaken to serve their customers as best they can.

In the early months of the pandemic where dealership staff was greatly reduced and hours of operation were slashed, response times skyrocketed to nearly 3 times their average at the start of the year, 10:26 in January and 29:47 in April. 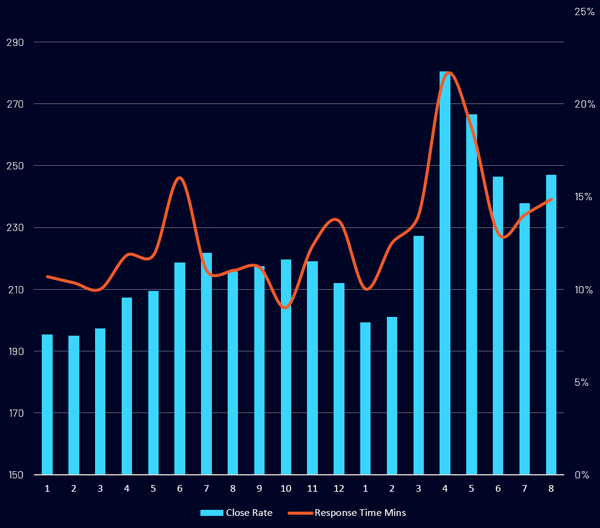 Closing rates in April and May exceeded 20%.  Anyone who was shopping for a car was serious about buying one, and quickly, no matter how slow response times were from dealerships.  Fast responses fell to their lowest percentage of 63% in April, and sales attributed to fast response times fell to match.  As dealerships again increase their ability to respond quickly to customer needs, the number attributed sales is also on the rise.

The dealerships that have survived have gotten stronger.  To stay afloat they had to improve their processes, and it appears that average lead response time has more than rebounded to pre-pandemic levels.  August response times were two and a half hours shorter than January's, and September's were another two and a half hours faster than that!  Preliminary numbers for October show it down another hour to 4hr 17 min.

Does that mean it's worth it to wait?  When response times were at their slowest, closing rates were at their highest.  But no!  Don't wait to get out your first response.  This just means that there's a huge shift in the market taking place.

Here's the real insight:  When you compare the period from March to August (Covid) against the previous six months, closing rates went up 65% (16.8% / 10.2%) DESPITE response time going up 12.8% (246 min / 218 min).  That means that internet leads are now closing at the same rate as phone leads, and that they need to be treated as equally important and urgent.

This also has a lot to do with the data we're looking at.  Almost all of the data we analyze comes from dealers on our marketing platform, and we're doing things a bit differently.  With the implementation of DR tools like FrikinTech's FQR (First Quality Response) and our continued remarketing efforts across Facebook, we're not only seeing closing rates go up, but Gross Profit as well, netting our marketing customers upwards of a 60X return on ad spend across campaigns, verified by Facebook.

However, this is the age of Digital Retailing, and customers are doing a lot of the work online with specialized tools on dealers websites.  Ranging from chatbots to customized payments and lease options, there are plenty of ways for customers to engage on their own time.  Driven Data partner FrikinTech has revealed customers taking nearly a year to shop before actually becoming a lead.  Customers are comfortable taking their time, especially as consumers become more comfortable making big purchases, or at least big purchase decisions, online.

How Fast Should You Be?

Be as fast as you can and as thorough as you can.  If a customer submits leads to multiple dealerships in the area, being the first one to get them on the phone and in to your store is invaluable.  That means that you need to be on the phone with them, communicating by email, or somehow convincing them to leave their homes to enter your store, within 4 to 5 hours of lead submission.